Rheumatoid arthritis (RA) is characterized by production of autoantibodies against autoantigens such as extracellular matrix proteins, synovial inflammation and hyperplasia, and progressive cartilage and bone erosion. The RA-associated autoantibodies might form immune complexes in the joints, thus initiating synovitis, recruiting inflammatory cells, and leading to swollen articulations. Developmental endothelial locus 1 (DEL-1) is a 52 kDa protein that is secreted by tissue-resident cells and regulates both the initiation and resolution of inflammation. Because the anti-inflammatory benefits of DEL-1 are partially attributed to leukocyte recruitment modulation, the protein can be a protective candidate against inflammatory arthritis.

Next, mice with endothelial cell–specific overexpression of DEL-1 reduced arthritis development in the CIA and CAIA models. In contrast, mice who specifically overexpress DEL-1 with collagen VI (ColVI) alpha1 promoter (ColVI-Del1) in mesenchymal cells, including synovial fibroblasts, failed to inhibit developing arthritis in the CAIA model. These results suggested that the overexpression of DEL-1 might not be involved in the protective mechanism against inflammatory arthritis after development of arthritogenic antibodies against type II collagen has already taken place.

This finding led the group to examine the mononuclear cells harvested from the lymph nodes (LNs) of ColVI-Del1 mice.  They found reduced differentiation of follicular helper T-cells (Tfh cells) and decreased expression of transcription factor B cell lymphoma 6 (BCL6) that is critical for early dendritic cell-dependent Tfh differentiation, which might lead to a decrease in IgG production. 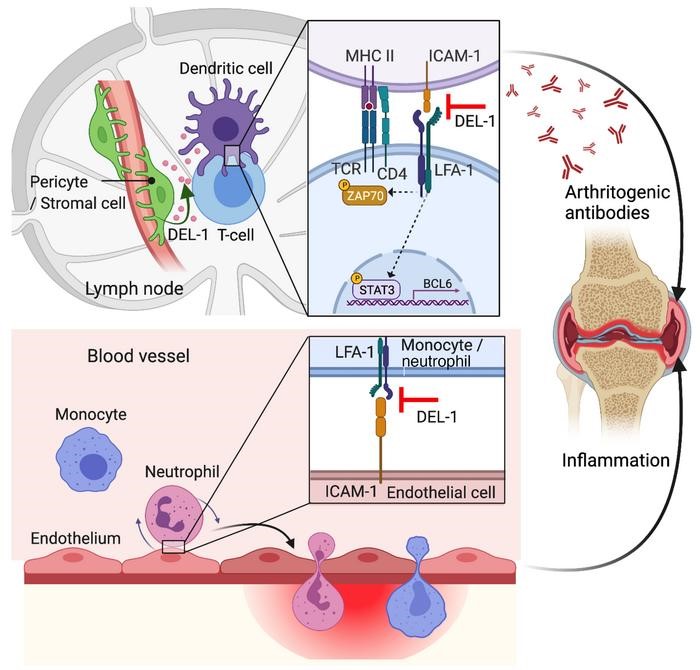 For more information, please refer to the original article:

The following Chondrex, Inc.  products were used to elicit mouse arthritis in order to determine the mechanism of action of DEL-1 in the CIA and CAIA models.