Keep reading below to learn more about the CAIA model and how it compares to the Collagen-Induced Arthritis (CIA) model!

Advantages of CAIA
1) Faster Results: Severe arthritis is induced within 24–48 hours (Figure 1A) instead of the four weeks required to induce CIA after immunization with type II collagen (Figure 1B).
2) Broad Applicability: Unlike the CIA model, which requires a restricted MHC haplotype, the CAIA model can be induced in almost all strains of mice, including CIA-resistant, Tcell deficient, gene knockout, and  transgenic mice.
3) Consistency: The severity of arthritis apparently correlates to the dose of monoclonal antibody cocktail, and more severe and consistent arthritis can be induced by increasing the dose of monoclonal antibody cocktail.

Therefore, this model is ideal for studying the pathological role of individual gene products, cytokines, as well as screening and evaluating anti-inflammatory agents (Figure 1) without influences of complete or incomplete Freund's adjuvant, which strongly affects the host's immune system. 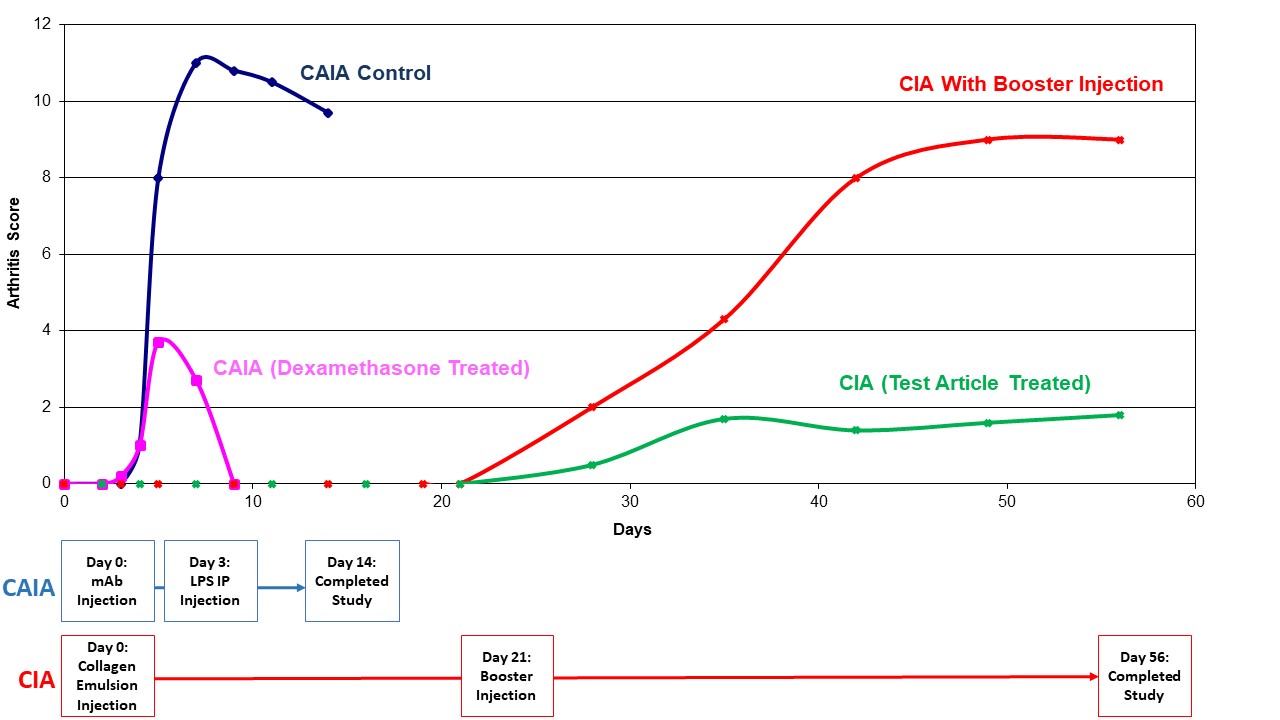 Figure 1 – Comparison of authentic CIA and monoclonal antibody-LPS induced arthritis (CAIA)
(A) CAIA: A cocktail of 5 monoclonal antibodies to type II collagen was injected IP on day 0 followed by an
IP injection of LPS (50 µg) on day 3. Arthritis developed on day 4 and reached its peaked on days 7-8.
The therapeutic effects of test compound were determined on day 7. Osteoclast formation and bone
degradation will continue to progress until day 21 (not shown).
(B) Authentic CIA: Arthritis developed around 4 weeks after immunization, and reached its first peak after 7
weeks, and then a second peak after 9-10 weeks. It takes 5 to 8 weeks to evaluate the therapeutic effects of
test compounds. 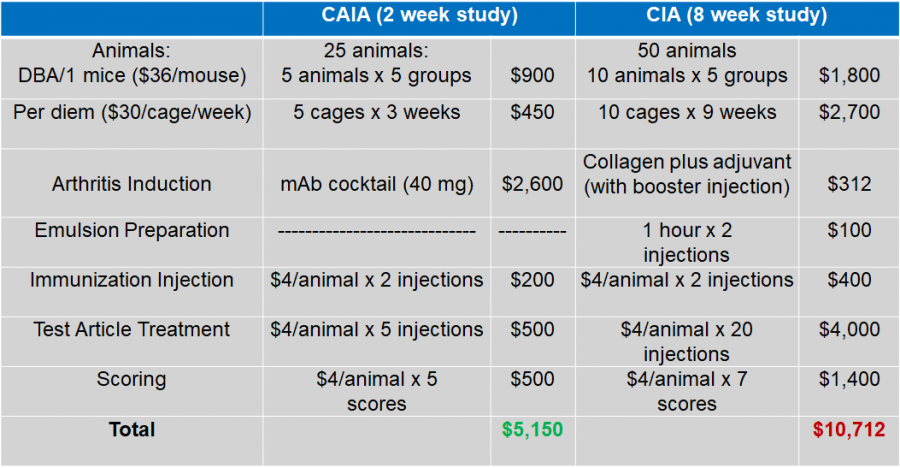 Original 4-Clone Cocktail
Collagen-induced arthritis (CIA) is mediated by autoantibodies to type II collagen. A similar arthritis can be induced by a 4-clone cocktail of anti-type II collagen monoclonal antibodies alone or in combination with LPS. Our original 4-clone cocktail has been used for inducing arthritis in various strains of mice, especially CAIA-high responder strains, such as Balb/c and DBA/1 mice.

The endotoxin level of Chondrex's cocktail is less than 10 EU/ml, but often much lower. Please
inquire about individual lots. 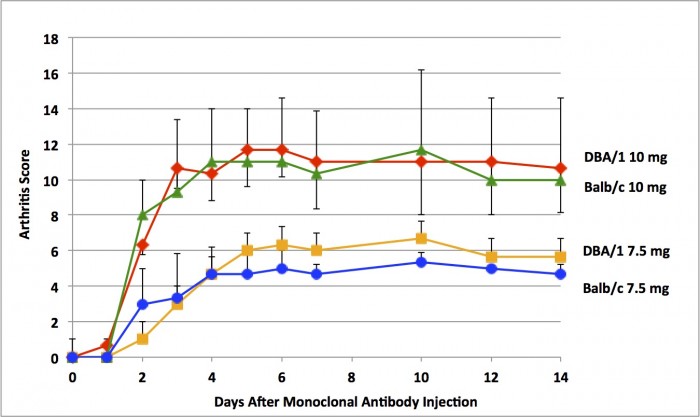 Important Roles of Bacteria Toxins in the Pathogenesis of Autoimmune Arthritis
Arthritogenic monoclonal antibody cocktail induces a similar arthritis to CIA (Figures 4 and 5).  However, it is unlikely that autoantibodies alone are capable of inducing autoimmune diseases in humans. For example, bacteria toxins, such as lipopolysaccharide (LPS), Staphylococcal enterotoxin B (SEB), and M. arthritidis mitogen (MAM), play a synergistic effect with autoantibodies to type II collagen, and induces severe arthritis in mice (Figure 6). Therefore, the combination of a sub-arthritogenic dose of monoclonal antibody cocktail and LPS has been widely used for inducing severe arthritis at a high incidence in mice for a variety of  purposes including the evaluation of therapeutics. 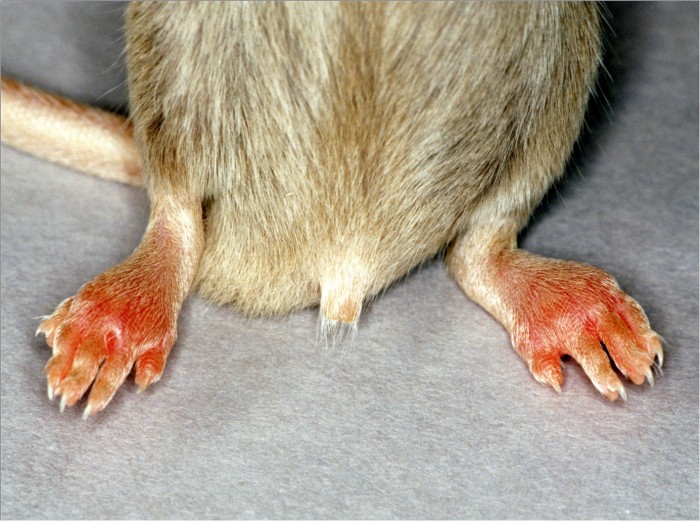 Figure 5 - Histopathology of monoclonal antibody-induced arthritis in DBA/1 mice
(A) The control shows an uninvolved joint from a mouse injected with an ineffective pair of monoclonal
antibodies.
(B) The mAb-induced arthritis shows an arthritic joint with severe synovitis with inflammatory cells, pannus
formation, and cartilage erosion. 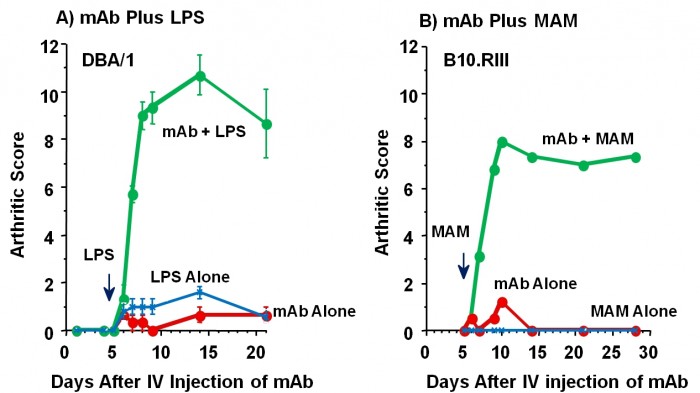 Mouse Strains
CAIA bypasses the requirement for host’s generation of autoantibodies to type II collagen, thus can be induced in mice that do not possess CIA-susceptible MHC-haplotypes (H-2q and H-2r) such as various knockout or transgenic mice. All strains of mice, which are normal with respect to mounting an inflammatory response including complement activation, should be susceptible to CAIA.

Parenthesis: Assumed, but have not tested
*: Develop CIA by alternative immunization with CFA containing high concentration of M. Tuberculosis.

Two Factors that should be considered by Users of Animal Models
Animal models have contributed to remarkable advances in the understanding of numerous human diseases.  As invaluable as animal models are, some drawbacks do exist.  One such drawback stems from the different sources of variability which can affect the outcome of the experiments.  Therefore, a pilot study is generally recommended for first time users of all animal models.  A brief discussion of the 2 main points of variability will be explained below.

1.    Mouse Vendors
The genetic background of mice, even in the same strain, will vary from vendor to vendor and can affect how the animals respond to various reagents, thus impacting the results of your experiment (1).  Therefore, testing animals from different vendors using a defined protocol is recommended before proceeding with a large full-scale experiment.

2.    Housing Conditions
The bacteria flora is very important to the health of the animal, including the proper functioning of the immune system (1).  Therefore, we recommend housing animals in Specific Pathogen Free (SPF) conditions rather than conventional conditions to avoid variability caused by bacteria.

Overall, special consideration of these main points of variability will aid the researcher in completing their experiments with less confounding results.

Arthritogenic Epitopes
The arthritogenic epitopes are not evenly distributed along the type II collagen molecule, but are apparently clustered within certain regions of type II collagen depending on MHC types in mice, such as cyanogen bromide (CB) digested peptide 11 (CB11) in DBA/1 (H-2q) mice (Figure 7) and CB8 in B10.RIII (H-2r) mice. Importantly, a similar restriction of autoantibody-CB peptide reactivity is observed in patients with rheumatoid arthritis. For example, autoantibodies from one group of patients dominantly react with CB11, whereas autoantibodies from another group react with CB8 and CB10.

NOTE: These scattered epitopes found in individual patients cannot be considered as arthritogenic epitopes, because clustered epitopes located in specific regions of the type II collagen molecule may play a role in fixing and activating complement. 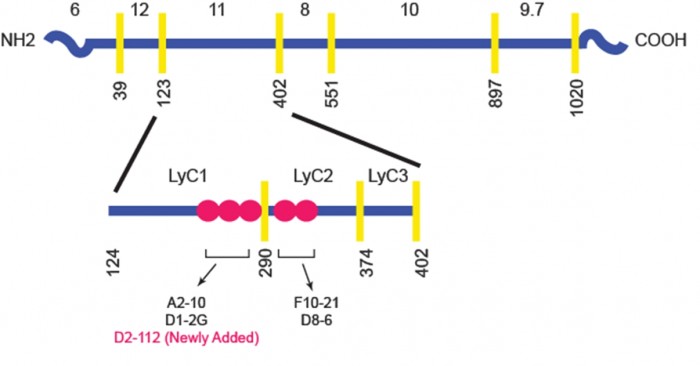 However, it is likely that a mixture of antibodies recognizing minor epitopes scattered along the type II collagen molecule is also capable of inducing arthritis in mice, because the distance of antigenic epitopes lying astride the two collagen molecules may be close enough in proximity for complement fixation.