Wheat is the most widely consumed food grain in the world. Wheat proteins are categorized into four fractions based on their solubility in solvents: water (albumins), water containing salt (globulins), alcohol (gliadins), and alkali or acid solution (glutelin) (1).  One of these proteins, gliadin, has highly antigenic repeated amino acid sequences, which can activate both the innate and adaptive immune response, resulting in immune-mediated injury of the intestines, such as intestinal permeability and inflammation due to infiltration of the lamina propria. Therefore, gliadin can trigger Celiac Disease (CD) which is an autoimmune disorder in genetically susceptible individuals(2).

Mouse CD models have widely been used to study the pathogenesis of gliadin and its immune responses. Mice who receive gliadin have significantly higher serum levels of gliadin specific IgE and IgG1 antibodies (3–6). To evaluate the humoral immunity against gliadin in the mouse CD models, Chondrex, Inc. provides ELISA kits for assaying mouse anti-gliadin subtype and subclass antibodies.

What is Gliadin? (7, 8)
Wheat contains 8%–15% protein, from which 10%–15% is albumin/globulin and 85%–90% is gluten. Gluten is a protein mixture mainly made up of gliadin and glutenin. The gliadin and glutenin proteins are grouped as prolamins which are insoluble in water, but soluble in ethanol and contain high levels of amino acids glutamine (38%) and proline (20%). Gliadin is classified by its differing primary structures into α-, β-, γ-, and ω- gliadins which range in size from 28 – 55kDa.  The proline-rich sequences of gliadin result in tight and compact structures that are highly resistant to proteolytic digestion in the gastrointestinal tract, and that can induce the adverse immune reactions in celiac disease. 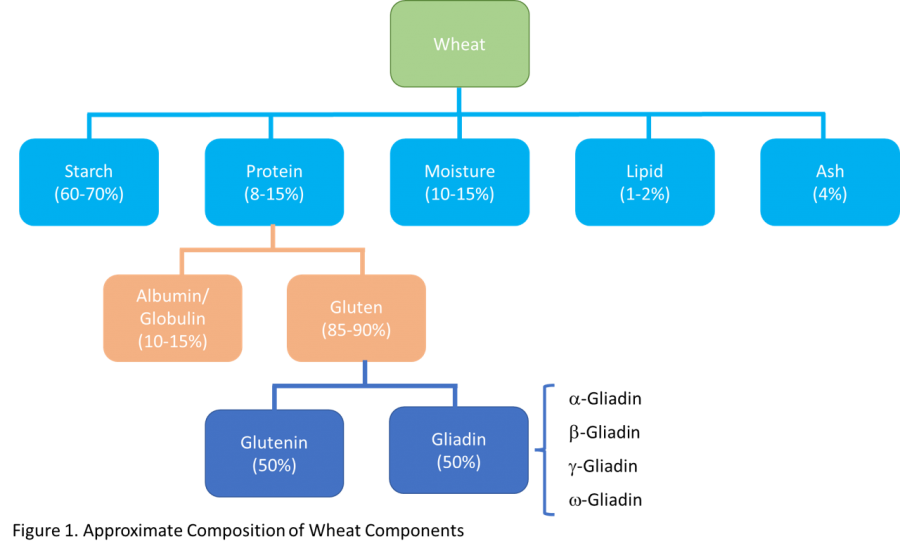 Gliadin Related Diseases in Humans (2, 7).
Wheat is a factor which can cause gastrointestinal symptoms. Outcomes such as wheat allergy, coeliac disease, and non-coeliac gluten sensitivity have been identified. Gluten in diets can also cause CD, an immune-mediated disease. The immune response triggered by the peptides generated from digested gliadin can initiate an immune response causing mucosal inflammation and increased gut permeability. CD has appeared in susceptible patients carrying specific genetic dispositions of human leukocyte antigen (HLA)-DQ2 or DQ8.14. These patients show high levels of serum antibodies against amino acid sequences (QQFPQQQ, QQIPQQQ, and QQLPQQQ) found in gliadin. Wheat allergy occurs by an IgE-mediated reaction to gliadin. Within minutes to hours after exposure to gliadin, symptoms such as itching, swelling, skin rash, and life-threatening anaphylaxis, can lead to long-term problems such as baker’s asthma, rhinitis, atopic dermatitis, urticaria, or wheat-dependent exercise-induced anaphylaxis. Non-coeliac gluten sensitivity is considered a syndrome that occurs in a heterogeneous group of patients with similar gastrointestinal and extraintestinal symptoms, clinical histories, and characteristics.

Timeline of Mouse Wheat-Gliadin Allergy Models
Many protocols have been published for inducing mouse models for wheat-gliadin allergy. The following are sample protocols for allergen challenge procedures using gliadin. Chondrex, Inc. recommends establishing and optimizing a protocol according to your study needs, study purposes, mouse strain, housing condition, and quality of gliadin.

1) Immunization and Oral Sensitization Model (3, 4)
BALB/c mice are sensitized twice, 2 weeks apart, with 50 μg of Gliadin adsorbed to 1 mg of aluminum hydroxide by intraperitoneal injection. Two weeks after the second sensitization, the mice are orally administered 10 mg of gliadin in 500 μl of water via an intragastric feeding needle every other day for a total of seven times.

2) Immunization Only (5)
BALB/c mice are sensitized with 10 mg of Gliadin adsorbed with aluminum hydroxide by intraperitoneal injection at days 0, 10, 20 and 30.

Evaluating Wheat-Gliadin Allergy Models
In a wheat-gliadin allergy mouse model, serum histamine levels, a marker of mast cell degranulation, were significantly higher than controls. Serum IgG1 and IgE antibody levels against gliadin were also significantly higher, but not IgG2a and IgA antibody levels. In addition, serum cytokine levels showed higher IL-4 (Th2 cytokine) but not IFN-g and IL-12 (Th1 cytokine) and IL-17 (Th17 cytokine), and IL-10 and TGF-b (regulatory T cytokine) levels (3, 4). These results suggest that the Th2 response plays a dominant role in the development of the disease in mice.  In another gliadin model, intestinal permeability was evaluated by FITC-dextran 4kDa (9). Therefore, markers for the evaluation of wheat-gliadin allergy in mouse models must be considered and chosen depending on the induction protocols.