Rheumatoid arthritis (RA) is a complex autoimmune disease with various genetic and environmental factors collectively contributing to its pathogenesis. For instance, an estimated 80% of RA patients carry at least one of the four HLA-DRB1 alleles linked with RA (1). One of the most studied environmental factors linked with RA is periodontal infection caused by Porphyromonas gingivalis. P. gingivalis expresses a peptidyl-arginine deiminase (PAD) that is capable of citrullinating human peptides. Citrullination is hypothesized to induce the production of anti-cyclic citrullinated proteins (anti-CCP) antibodies, the presence of which is used as a diagnostic tool for RA (2). However, determining the contributions of P. gingivalis and other environmental factors to RA pathogenesis has proven difficult due to a lack of appropriate study methods.

A recent study published by scientists at Chondrex, Inc. suggests that a variety of bacterial components play important roles either individually or communally to evoke serological disease markers and influence disease outcomes. While the current study only focuses on a select few bacterial pathogens, the results imply that disturbances to microbiome homeostasis could contribute to RA development.

In this study, our scientists established three groups: 1) a normal, control group, 2) RA patients that meet criteria for rapid radiographic progression (RRP), and 3) RA patients that do not meet RRP criteria (Non-RRP). Within these three groups, the IgG and IgA antibodies against three bacterial pathogens (E. coli-lipopolysaccharide (LPS), P. gingivalis-LPS (Pg-LPS), and peptidoglycan polysaccharide (PG-PS)) were determined with an improved ELISA system utilizing ChonBlock to prevent non-specific reactions caused by immunoglobulins and immune complexes in samples. The antibody responses were compared with each other as well as several diagnostic markers for RA (Table 1). 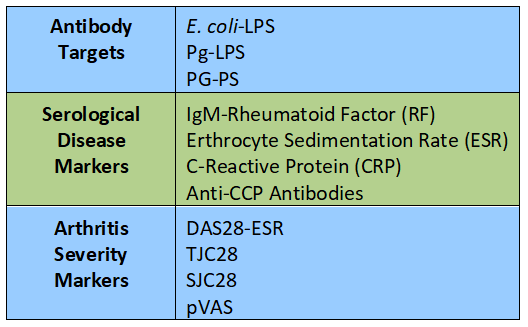 When looking solely at the antibody responses to the selected pathogens, there was no significant difference in the IgG or IgA response between the normal, RRP, or Non-RRP groups. Additionally, there was no change in antibody responses associated with age or disease-duration. These results led the researchers to conclude that antibody responses to environmental pathogens are generally unique and consistent for individuals. However, there was one notable exception: increased IgG and IgA anti-Pg-LPS antibodies were observed in patients receiving long term treatment of methotrexate (MTX).

To expand upon this idea that different bacteria may be involved in perpetuating arthritis in RRP and non-RRP RA, the researchers analyzed the correlations between arthritis severity markers and antibody responses to the selected pathogens (Table 4).

In the RRP group, all the arthritis severity markers studied positively correlated with IgA/IgG anti-Pg-LPS ratio and/or IgA anti-Pg-LPS levels, indicating that Pg-LPS may play a role in perpetuating arthritis symptoms in RRP RA. In the non-RRP group, no correlation was found between arthritis severity markers and anti-PG-PS antibody levels despite the correlation found between anti-PG-PS antibodies and serological disease markers (Table 3). Instead, a positive correlation was found between pVAS and IgA/IgG anti-Pg-LPS antibodies, indicating that Pg-LPS may have a role in non-RRP progression as well. There was also a positive correlation between IgA/IgG anti-E. coli-LPS antibodies and DAS28-ESR in the Non-RRP group, indicating that several pathogens may be involved in exacerbating non-RRP RA symptoms.

The researchers also compared serological disease markers with arthritis severity markers, as well as hematological markers and inflammatory markers, however these correlations are outside the scope of this blog post. The original paper contains a wealth of information that could prove to be useful in discerning pathological mechanisms of RA. To see the data in it’s entirety, you can find the open access journal article here.

In this study, there were no differences in IgG or IgA responses between the RA groups and the normal group were found. This led the researchers to conclude that the correlations between IgA/IgG antibody responses to selected pathogens and RA disease activity indicates that “RA patients are exposed to excessive amounts of pathogens, which overwhelm IgA and IgG antibody defense functions.” While this data does not clearly indicate that E. coli-LPS, Pg-LPS, or PG-PS are directly involved in promoting serological disease markers and RA pathogenesis, the correlations suggest that these pathogens may individually or collectively be involved in aggravating arthritis and evoking serological markers. Furthermore, the difference of correlations between bacterial pathogen antibody responses and disease markers in the RRP (Pg-LPS) and Non-RRP groups (E. coli-LPS and PG-PS) indicates that different pathogens are involved in evoking serological disease markers in these disease phenotypes.  Figure 1 outlines how the bacterial pathogens studied may influence serological disease markers in RRP and non-RRP RA. From this standpoint, the researchers suggest that the true underlying disorder of RA is dysbiosis of the gastrointestinal tract and/or disruption of the intestinal mucosal barrier defense. 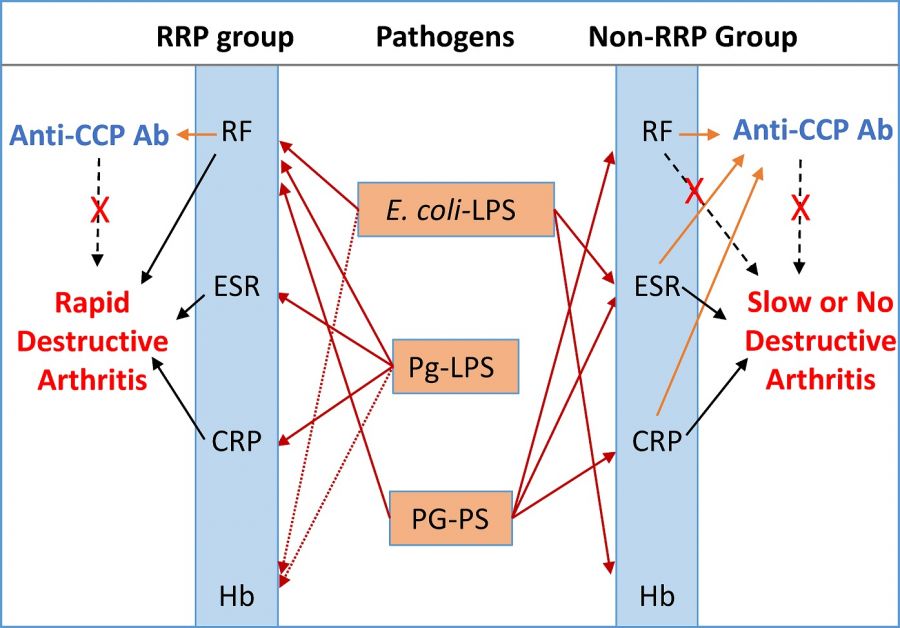 With regards to RA progression in the RRP group, the researchers found that long term treatment with methotrexate (MTX) increases IgG and IgA antibody responses to Pg-LPS. They suggested that the increase in these antibody responses to Pg-LPS indicates that MTX disrupts the bacterial composition of the gastrointestinal tract, possibly allowing pathogenic bacteria (i.e. P. gingivalis) to colonize these spaces. The increased P. gingivalis exposure could contribute to the development of dysbiosis or disruption of mucosal barrier function in susceptible patients, which may be one of the pathological mechanisms implicated in RRP RA. However, more research is required to determine the affect of MTX treatment on mucosal microbial populations.

While though this study only reported correlations between a small set of bacterial pathogens and markers of RA, it provides a novel framework for studying RA pathogenesis. Using new strategies to study the mucosal microbial compositions of RA patients and other autoimmune disease patients could elucidate the molecular mechanisms underlying seemingly idiopathic autoimmune diseases.