ChonBlockTM: A Solution to False Positive Reactions in ELISA

Update 1: Our scientists have published a peer-reviewed, open-access article that demonstrates how ChonBlock can improve assay results and lead to more accurate data when assaying human serum samples. Read the article here.

Since its invention nearly 40 years ago, the Enzyme-Linked Immunosorbent Assay (ELISA) method for determining antibody responses to autologous components and potential pathogens in sera from patients with a variety of diseases has become a mainstay in scientific studies. A search on PubMed for the keyword “ELISA” will yield a staggering number of analytical and clinical research papers that have depended heavily on some format of this method.  One of the most commonly used formats today is indirect ELISA, which is outlined below: 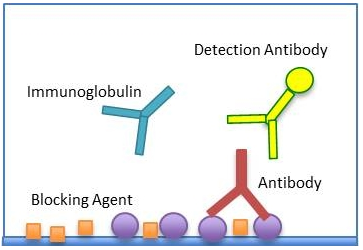 While other formats (direct ELISA, “sandwich” ELISA, competitive ELISA, etc.) differ in the way the analyte is detected, they all rely on the same basic principle: the high binding affinity of proteins to plastic surfaces. However, this principle also results in a variety of non-specific reactions that lead to false positive results and misinterpretation of data.

Below is a list of the four main types of non-specific reactions that occur in an antibody assay by indirect ELISA that can lead to false positive results:

1) Hydrophobic binding of immunoglobulins in sample specimens to ELISA plate 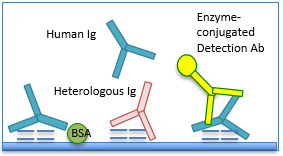 Immunoglobulins present in sample specimens strongly bind to the plastic surface of an ELISA plate via hydrophobic interactions. Currently, no conventional blocking agents can effectively block this interaction, with the exception of immunoglobulins in heterologous serum that competitively binds to plastic surfaces as described by Fuji et al. (1989). The immunoglobulin bound to the plastic surfaces are detected by secondary antibodies, in addition to the specific antibodies bound to the antigen. This reaction, referred to as the “background noise reaction,” is unique to each individual sample and results in the most intense type of false positive reaction in indirect ELISA. It can be accounted for by running control, non-coated wells for each sample and subtracting the control OD value from the sample OD values in coated wells. Surprisingly, this step is often omitted and has led to confusion among researchers. 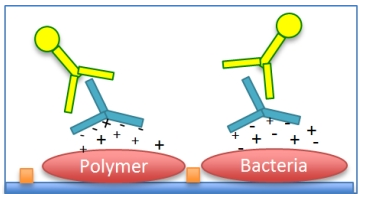 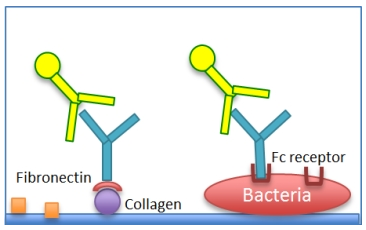 Strong, specific or non-specific protein-protein interactions, such as those between large molecular weight antigens and immunoglobulins, can lead to direct and indirect binding of immunoglobulins to target antigens, resulting in an over estimation of the analyte in a sample. 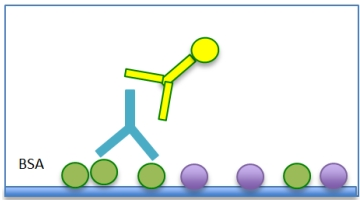 Humans and animals possess antibodies against virtually all of the environmental agents they are exposed to in their lifetimes, including dietary proteins and potential pathogens. Consequently, these natural antibodies strongly react with blocking agents such as BSA (dietary protein), casein (dietary protein), and heterologous serum components (as well as contaminants present in antigen preparations) to create a variety of false positive reactions in indirect ELISAs.

4) Non-specific binding of detection antibody to plastic surfaces and antigens.

Like immunoglobulins in samples, the detection antibody used to visualize analyte concentration also binds to plastic surfaces and antigen molecules non-specifically. This non-specific can be determined in blank wells and is generally lower much lower than the background noise reaction due to the very low concentration of detection antibody used (ng-ug/mL). However, it is important to note that the detection antibodies will adhere to certain antigens such as bacteria and collagen, creating an unusually high blank value.

Given the sheer volume of papers referencing it, it is apparent that the ELISA method has helped to shape the landscape of medical research for several decades. With such a large quantity of data relying on this method, we consider it important to re-evaluate the current ELISA format and recognizes the inherent complexity of reactions attributed to its principle. Eliminating these non-specific reactions is especially important when diagnosing infectious diseases and evaluating vaccine efficacy due to low antibody concentration. Here at Chondrex, Inc., we are striving to raise awareness about these non-specific reactions in hopes to improve the antibody assay system and eliminate false results in the research and clinical fields.

A 2014 study conducted by scientists at Chondrex, Inc. sought to compare the blocking of these false positive reactions by conventional ELISA buffer systems with a new ELISA buffer system, ChonBlockTM (Chondrex, Inc., Redmond, WA). When it came to blocking the most intense false positive reaction, ChonBlockTM more effectively prevented the hydrophobic binding of immunoglobulins in sample specimens to plastic surfaces than the other buffers tested (see figure below). Furthermore, ChonBlockTM proved to be capable of preventing ionic and protein-protein interactions between immunoglobulins and antigens. To read the full article, click here. 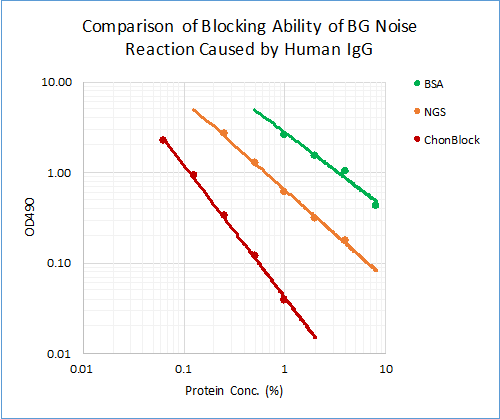 The indirect ELISA method for serological antibody assay has been used for far too long without understanding the full implication of its underlying principle. A change in the protocol is needed in order to prevent misinterpretation of results and the dissemination of conclusions based on inaccurate data. By developing a new buffer system, ChonBlockTM, Chondrex, Inc. is leading the way to a better understanding of ELISA and improving its effectiveness across all fields of research.