Goodpasture syndrome, an autoimmune disease caused by autoantibodies against the glomerular basement membrane (GBM) in the kidney and lung, manifests as severe renal disease and pulmonary hemorrhage. Patient autoantibodies recognize the non-collagenous domain of the alpha chains (α1 – α6) of type IV collagen (NC1), which comprises the GBM. More specifically, the primary Goodpasture antigen was identified in humans as the NC1 domain of the α3 chain of type IV collagen [α3(IV)NC1]  (1-3) and was confirmed in several animal models (3, 4). Furthermore, Kohda et al. reported that the disease can be induced in Wistar Kyoto (WKY) rats by immunizing them with recombinant α4(IV)NC1 fragments, or administering anti-α4(IV)NC1 antibodies (5).

Goodpasture disease, which is an autoimmune disease caused by anti-GBM antibodies, is characterized by glomerulonephritis and pulmonary hemorrhage. The GBM consists of trimers of alpha chains (α1 – α6) of type IV collagen. Among the 6 alpha chains, the non-collagenous domain 1 of the alpha 3 chain of type IV collagen (α3(IV)NC1) was reported as the primary antigen in human Goodpasture disease (9).

In order to study autoimmune-mediated nephritis, three classes of animal models have been developed: 1) Masugi Nephritis or nephrotoxic nephritis, which is passively induced in rats by injecting them with heterologous anti-GBM sera, such as rabbit anti-rat GBM sera (10). 2) Steblay nephritis, which is induced in animals such as sheep (11), guinea pigs (12), rabbits (13, 14), and rats (3, 15, 16) by actively immunizing them with heterologous or homologous GBM antigen emulsified with Complete Freund’s Adjuvant, and 3) passive transfer nephritis, induced by injecting purified autologous antibodies from the urine of nephritic rats into normal rats (17). However, glomerulonephritis cannot be transferred to normal rats by injecting sera from nephritic rats. 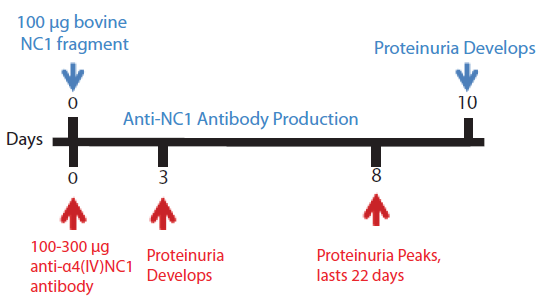 7-week-old female WKY rats (Harlan Laboratories, USA) were immunized with 100 µg of bovine NC1 fragments of type IV collagen emulsified with CFA (M. tuberculosis, 1 mg/ml, Cat # 7008) by subcutaneous injections at the base of the tail on day 0. To evaluate the severity of nephritis, the total amount of urinary protein secreted in a 16-hour urine collection period (from 5:00 PM to 9:00 AM) was analyzed using the Rat Urinary Protein Assay Kit (Cat # 9040). WKY Rats immunized with bovine NC1 fragments developed nephritis with proteinuria on day 10, lasting until day 28 (Figure 2). Chondrex, Inc. recommends monitoring rats until day 35. 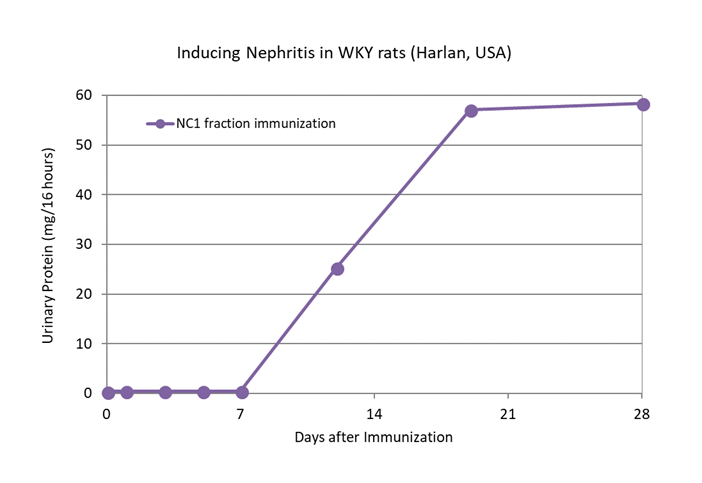 Individual monoclonal antibodies induce mild to severe nephritis in rats within 1-2 days with a single IP or IV injection.

Figure 3.  Dose effect (1-300 μg/mouse) of nephritogenic monoclonal antibody on a) pulmonary hemorrhage and b) proteinuria in WKY/NCrlCrlj (Charles River Japan).
The total amount of protein secreted in a 16-hour urine collection period (from 5:00 PM to 9:00 AM) was analyzed using the Rat Urinary Protein Assay Kit (Cat # 9040). Administering the monoclonal antibodies can induce nephritis with or without pulmonary hemorrhage in a dose dependent manner. 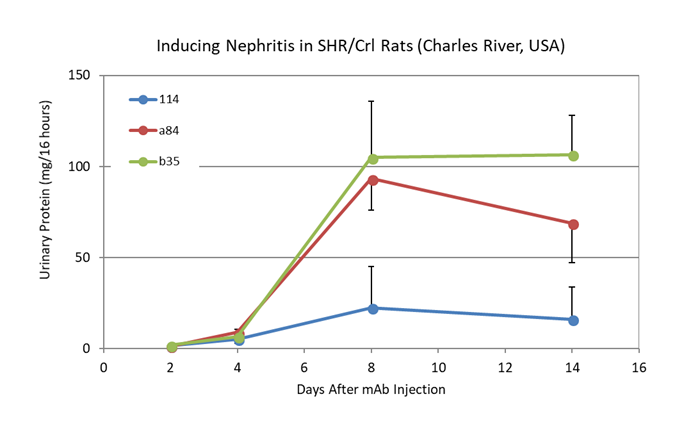 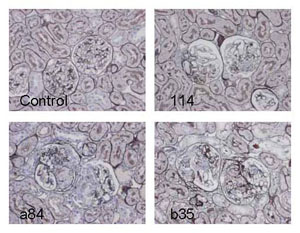 Many research institutes require approval of animal study protocols from their Institutional Animal Care and Use Committee (IACUC). Please consult with the IACUC at your institution before purchasing products intended for use in animal studies.

While Chondrex, Inc. provides recommended protocols for inducing nephritis, animal studies are difficult and have many sources of variation. We strongly suggest performing a small pilot study to optimize the protocols for your experimental purposes before proceeding with a large-scale study.

If you need help with planning your pilot study or a large-scale study, please contact us at support@chondrex.com. Our scientists will be more than happy to assist you with establishing or optimizing your protocol.

Not all rat strains are susceptible to these active and passive experimental anti-glomerular basement membrane disease models. Chondrex, Inc. recommends using WKY rats and its sub-strains for these experimental models.

Use healthy, young (7-8 weeks old) WKY/NCrl (in USA), WKY/NCrlCrlj (in Japan) or WKY/NlcoCrl (in Europe) rats and sub-strains SHR/NCrl rats (male or female) raised in specific pathogen free conditions. For unknown reasons, these are the only strains to be highly susceptible to nephritis both by immunizing with GBM antigen and by injecting anti-GBM monoclonal antibodies (3, 5, 16). Other sub-strains of WKY rats, such as WKY/ 1zm, WKY/km are low responders to nephritis. In addition, the SHR/NCrl strain (spontaneous hypertension rats) is a high responder to monoclonal antibody-induced nephritis, but the SHR/NHsd strain is not.

For example, WKY/NCrlCrlj (Charles River Japan) rats develop severe nephritis with a single IP or IV injection of anti-alpha 4 (IV)NC1 monoclonal antibodies (Figure 1). On the other hand, SHR/Crl rats (Charles River USA) are also susceptible to anti-alpha 4 (IV)NC1 monoclonal antibody-induced nephritis, but the severity is much lower than in WKY/NCrlCrlj rats as shown in Figure 2.

Note: WKY rats in Europe may not be susceptible to monoclonal antibody-induced GBM nephritis. Please contact us if you are planning a study using these rats.

One form of glomerulonephritis is Goodpasture disease, an autoimmune disease identified by the presence of anti-glomerular basement membrane antibodies that can also lead to pulmonary hemorrhage. The antigen for Goodpasture disease has been identified as the non-collagenous domain of the alpha 3 chain of type IV collagen (α3(IV)NC1), a component of the glomerular basement membrane (GBM). But this is not the only region of type IV collagen associated with anti-GBM disease, as the α4(IV)NC1 fragment has also been shown to induce glomerulonephritis similar to Goodpasture syndrome (16).

These differences in nephritogenic fragments among species of animals may depend upon the combinations of MHC haplotypes of animals and species of NC1 fragments used for immunization. However, it is apparent that the role of non-MHC molecules is more critical in susceptibility to nephritis, as various strains of rats and mice can produce autoantibodies to the glomerular membrane, but do not develop nephritis. Also, these animals are resistant to antibody-transfer nephritis.

Sado et al reported that WKY rats immunized with the non-collagenous domain of the alpha 3, 4 and 5 chain of type IV collagen, a major component of the GBM, produce antibodies that can react with type IV collagen found in the WKY rat glomerulus (16). These anti type IV collagen antibodies induce proteinuria typical of glomerulonephritis. The passive form of this model utilizes a single injection of monoclonal antibodies against α4(IV)NC1 (5).